The Loughriscouse herd is owned by Harry and Heather Heron and is situated in Co Down, Northern Ireland. Harry, who owns his own construction company, established the herd in June 2008 with purchases from a Gilbert Crawford reduction sale at Dungannon Farmers Mart. Having had experience on a small scale with commercial cattle, the couple felt the time was right to start investing in pedigree breeding cattle and had always had a fondness for the Charolais breed.

Following the purchases of Coolnasee heifers in 2008, 2009 and 2010 saw purchases made from the Taughmore herd owned by Harold Crawford in Fintona, Co. Tyrone, N. Ireland and purchases from Albert and David Connolly of the Brigadoon herd in Ballynahinch, Co. Down, N. Ireland. With these females came highly sought-after experience and information from the Connolly family which helped get the herd where it is today. The following year saw a further two more females bought from the awarding winning Brigadoon herd.

Having spent a few years getting to grips with the management side of cattle and many hours studying pedigrees and figures, February 2017 saw the next additions to the herd in the form of a trip to Stirling Bull Sales where three heifers joined the herd from Jim and Hamish Goldie’s herd at Dumfreisshire, Scotland.  First was Goldies Lassie, who stood female champion and Goldies Lena, who stood reserve champion. At the same sale, the top priced heifer Goldies Leona was purchased for £6800. She is by the 12,000gns Goldies Elation and out of the 16,000gns Maerdy Naser daughter, Goldies Veil. 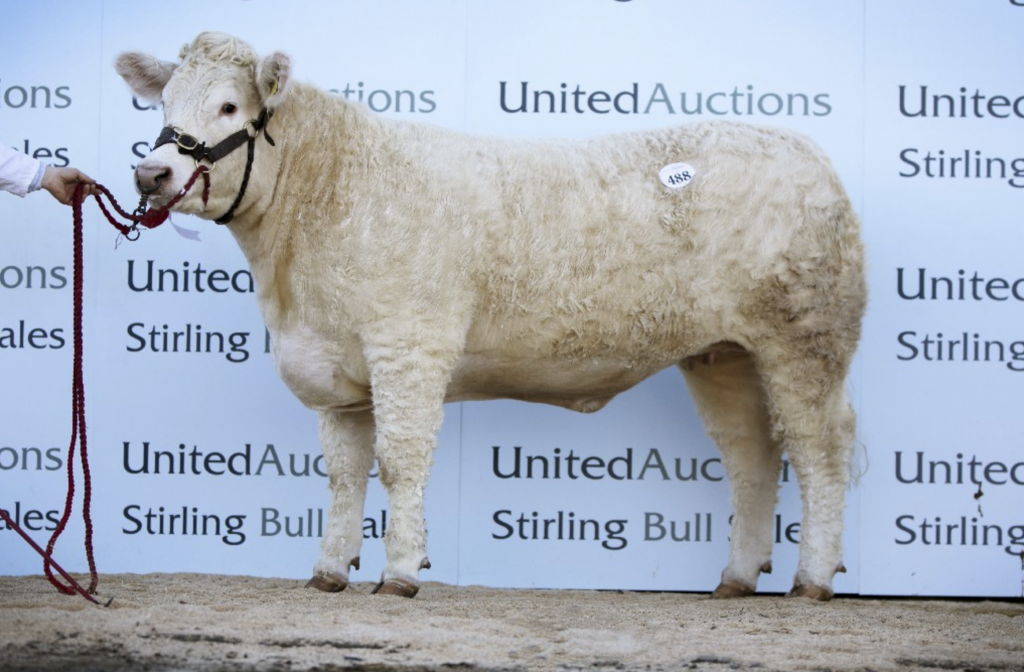 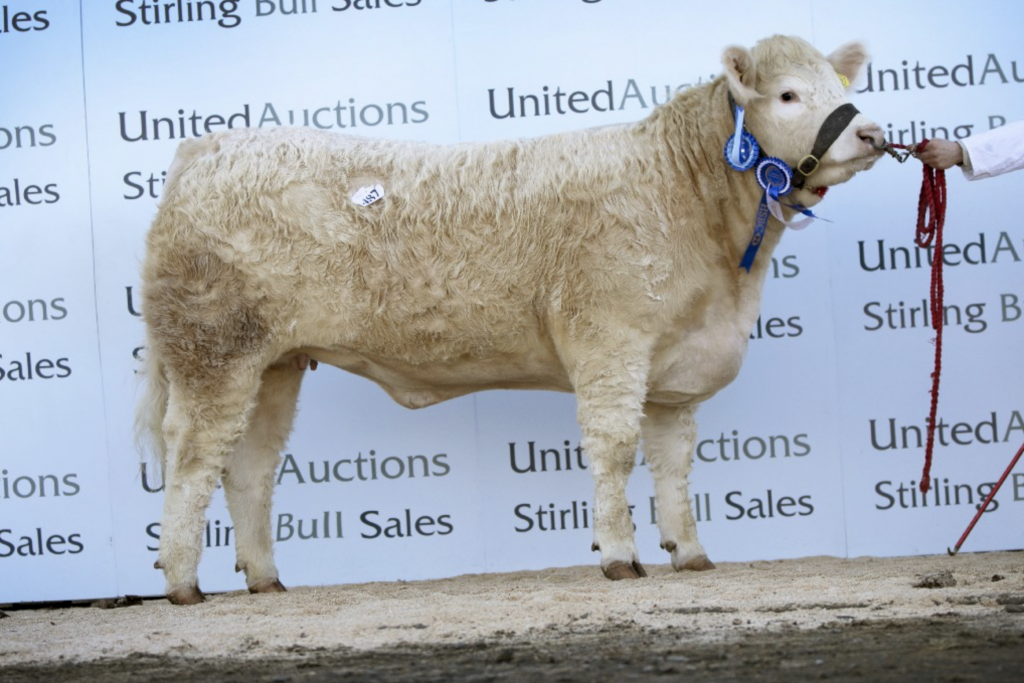 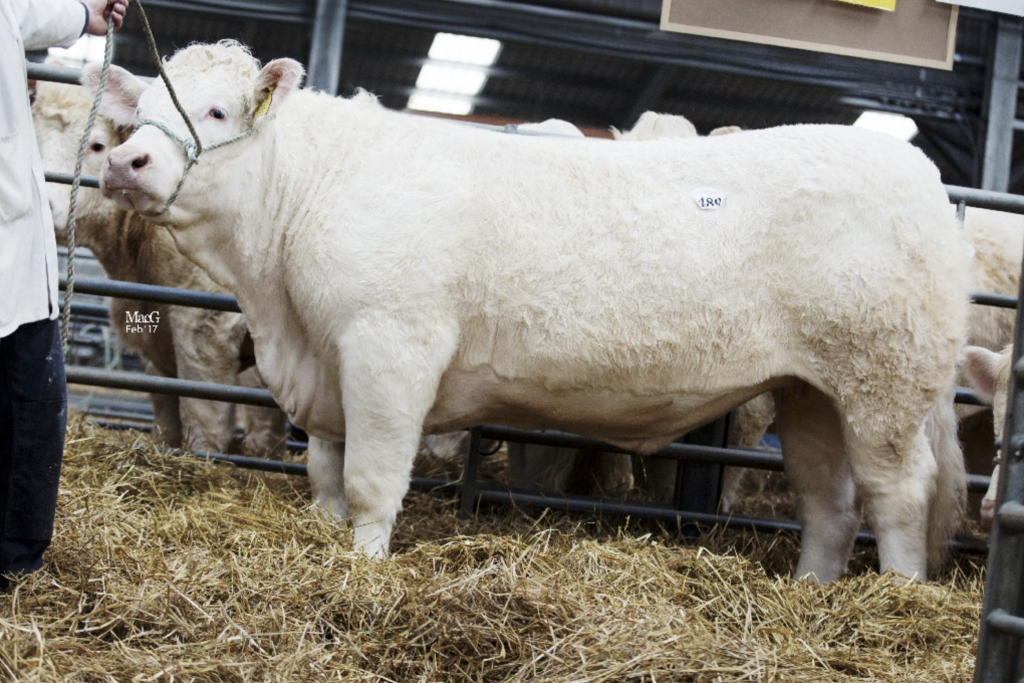 Following on from this a private purchase was made from Mr G. Patterson for Lagavaich Lola, whose dam, Lagavaich Hermine, won the reserve female championship at the Royal Highland Show in 2014.

The first six months of 2017 saw Harry and Heather pressing hard to have the foundation of the Loughriscouse herd firmly in position to move the complete herd to the next level.

The next additions were purchased at the British Charolais May Spring show and sale at Dungannon, County Tyrone in the form of the supreme and female champion, Derryharney Moonlight. This 15-month-old Doonally new daughter came from Harold Stubbs and Alan Burleigh of Lisnaskea, County Fermanagh. Joining her was the reserve female champion, Killadaes Lottie, purchased from Stuart and David Bothwell of Ballinamallard, Co. Fermanagh, N. Ireland. 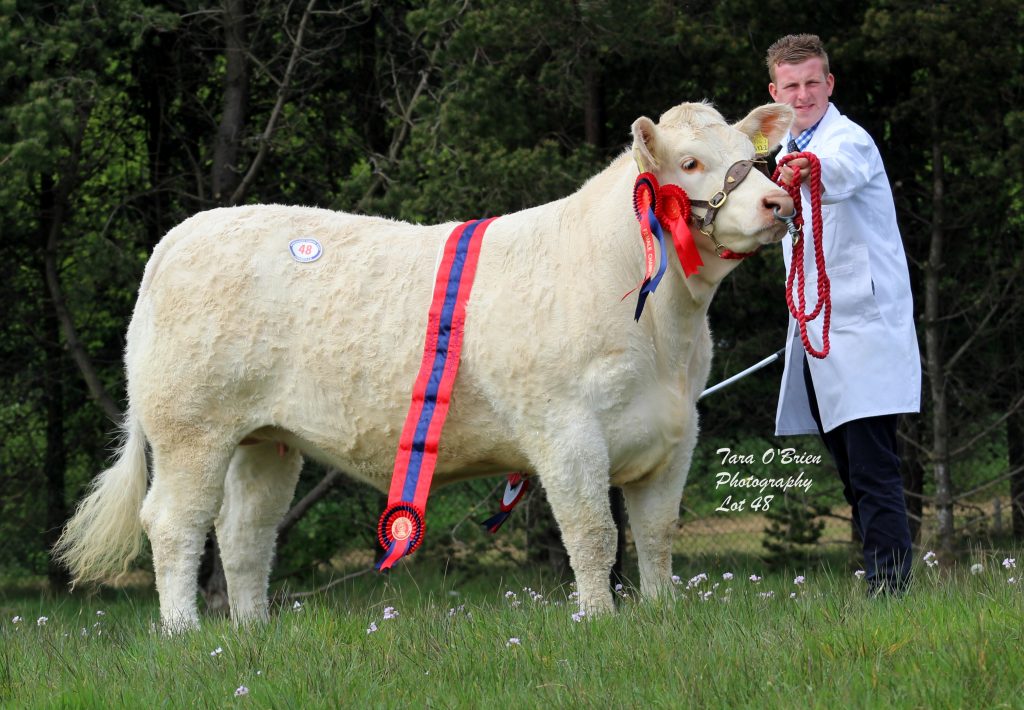 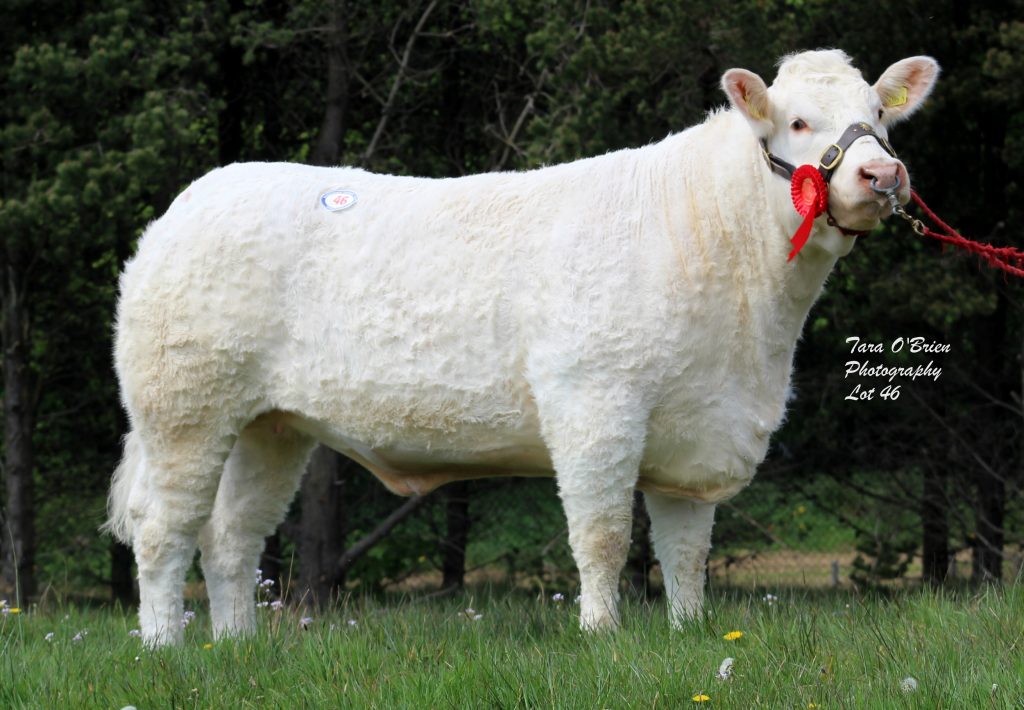 May that year saw a trip to Carlisle where Harry and Heather were impressed with breeders Sandra and John Middleton’s heifer, Hollywell Latin. Latin took the reserve supreme and female championship and was bought for 7000gns. She’s by Thrunton Fairfax and is out of the Thrunton Voldermort daughter, Hollywell Harmony. Having been born in Co. Londonderry, N. Ireland, she travelled to Carlisle only to return to her native country.

Latin has been an asset to the herd by producing two top class heifers, Loughriscouse Opium and Loughriscouse Persia and has since been flushed giving 10 grade A embryos to date.

Hollywell Latin and Loughriscouse Opium have picked up numerous wins at local shows including Antrim and Newry in 2019. 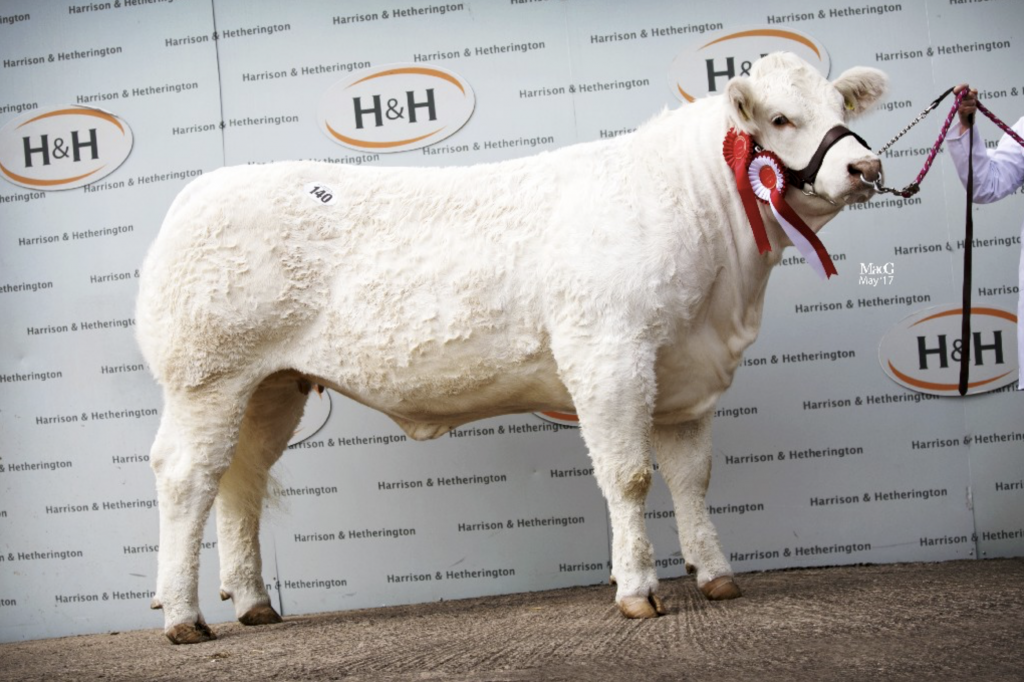 After a successful 18 months and now having 16 breeding cows, Harry wanted to raise the breeding stock by two more.

October 2019 saw the rising two-year old Thrunton Nefertiti join the herd. Bred from the top breeding Thrunton Flamenco, a daughter of the 22,000gns Newhouse Bigal, Nefertiti has been AI’d and confirmed in calf to Thrunton Fairfax.

With the establishment of easy calving, naturally fleshing lines brought into the herd to produce a solid base, November 2019 saw the arrival of a rather special female, the €11,000 Goldstar Osanna from Martin Ryan’s Goldstar herd in Cabra, Thurles, Ireland.

Having previously taken the senior female calf championship at the National Charolais Show in Tullamore when Harry first noticed her, she then went on to be junior champion at the Tullamore Sale before joining the Loughriscouse herd. By Goldstar Hugo, she is out of Goldstar Jamaique and was purchased for her power, femininity, performance, and that all-important X-Factor appeal.  Osanna has just commenced a flushing programme early June 2020.

Now running at a desirable number, the plan is to grow the herd and bring out homebred genetics to shows and sales. The herd is currently in a yearly TB testing regime, as well as vaccinated for BVD and is Johne’s Level 2. 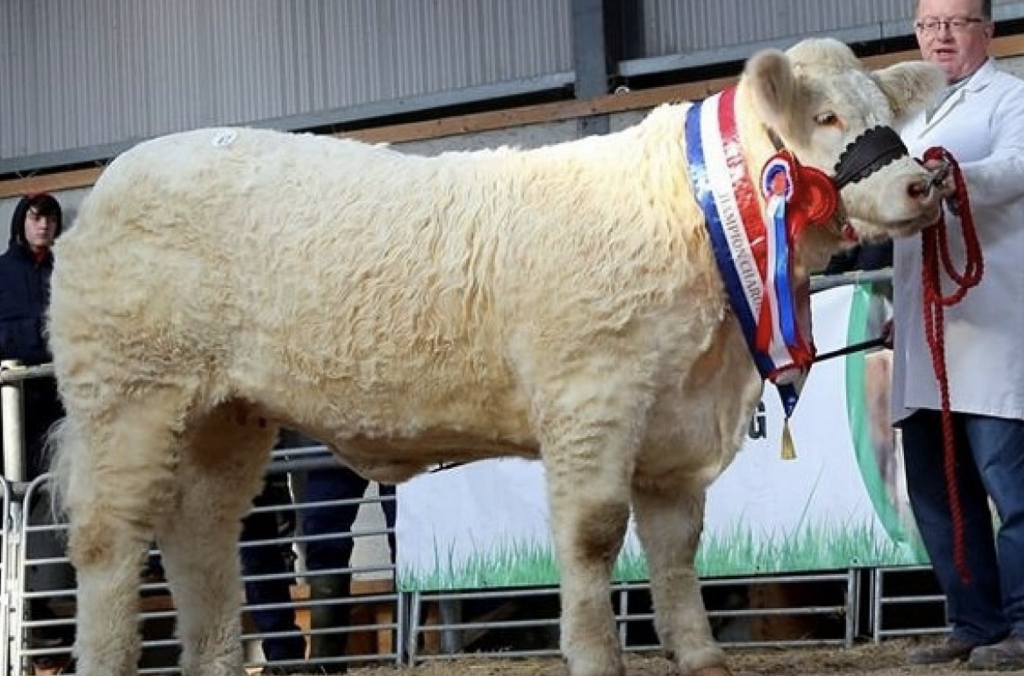 A trip over to Carlisle for the recent Charolais sale saw us make an exciting purchase in the form of Gretnahouse Pouncer from Alisdair Houston as a new stock sire for the Loughriscouse herd.

He will no doubt make a great addition to the herd and all being well we look forward to being able to offer semen by him. 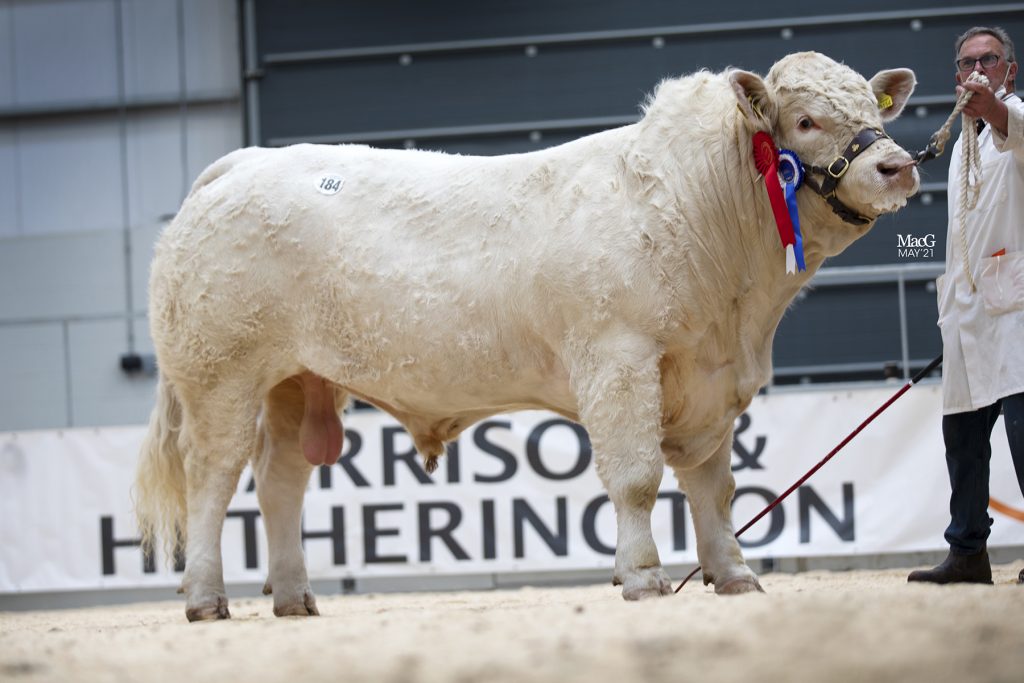