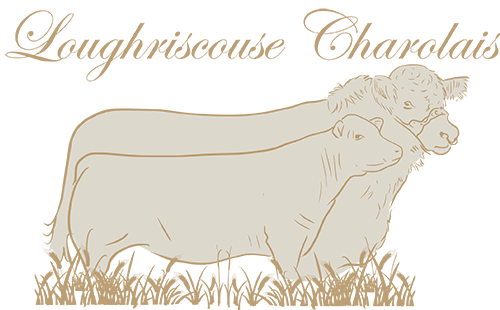 Loughriscouse Charolais sweep the board at Balmoral

Having had a few years off from showing it was certainly a welcome return to the show circuit this year with our team at Balmoral, our first time showing here, where we took both the male and female championship honours, as well as the overall breed championship under judge Raymond Irvine.

Taking the championship rosettes home on the day having won the male championship was our stock bull Gretnahouse Pouncer. Bought in Carlisle, he is by Westcarse Jimmy and out of Gretnahouse Japan, a daughter of Balthayock Gladiator.

Clinching the female championship was our cow and calf Thrunton Nefertiti, a Newhouse Bigal daughter, shown with her heifer calf, Loughriscouse Savina, a Thrunton Fairfax daughter.

Taking the reserve female championship was Goldstar Osanna, a Goldstar Hugo daughter, who was purchased at Tullamore Elite heifer sale.

Meanwhile other first prize winners came in the form of Loughriscouse Pippa, a Harestone Hercules daughter and then Goldstar Portia, a Goldstar Ludwig daughter. Taking second place to Pippa was Loughriscouse Persia, while Loughriscouse Ripple also picked up a fourth place in her heifer class.

We also won the group of three class and took reserve in the interbreed pairs class, finishing off a fantastic show for us. A huge thanks to the Keadyview grooming team, Sam McDowell and Gary Hanna for all the work prior and at the show. We look forward to getting back to normal in 2022 for a full summer season.

A trip over to Carlisle for the recent Charolais sale saw us make an exciting purchase in the form of Gretnahouse Pouncer from Alisdair Houston as a new stock sire for the Loughriscouse herd.

He will no doubt make a great addition to the herd and all being well we look forward to being able to offer semen by him.

On the sales front, November 2020 saw the addition of two new females from Martin Ryan’s highly successful Goldstar herd, purchased at Tullamore. The first to join at €12,200 was the 19-month old Goldstar Portia, a daughter of Goldstar Ludwig and out of Goldstar Gracie, while at €8000 was the Goldstar Echo daughter, Goldstar Pearle. This one is a daughter of Goldstar Nightingale. We look forward to seeing how these two stunning heifers perform in the herd.

With 2020 shows cancelled due to Cover-19 we are currently keeping everything crossed for some shows in 2021 where no doubt the learning curve will continue and hopefully we can catch up with our newly found showing friends.

The summer of 2019 saw the start of showing for the Loughriscouse herd which resulted in some pleasing results.

The next stop for us that summer was Ballymena Show where Latin won her cow and calf class again and then went one better than her previous outing to stand overall breed champion. This time Opium won her class and then stood reserve champion again behind Latin.

At Newry Show, Latin again won her class and went breed champion with Opium standing reserve champion and the two of them won the pairs class.

We then attended the Randox Antrim Show where Latin won her class and stood Bank of Ireland Charolais champion. Opium stood second in her class, but the two females joined up to win the pairs class together.